How to run an AGM: before

Previous    Next
An Annual General Meeting (AGM) is a meeting of an organisation's general membership, held once a year in order to discuss the previous year's activities and financial accounts. Is is also taken as an opportunity to elect in the committee to run the CSP for the forthcoming academic year.

All Clubs, Societies & Projects are required to run an AGM each year, while CSPs with large memberships are also required to participate in the Leadership Elections (eVoting)

All CSP AGMs must be conducted in accordence with the Union Minor Elections Bye-Laws.

You must complete the following at least five days before nominations open:

Once nominations have opened the following must also be done: 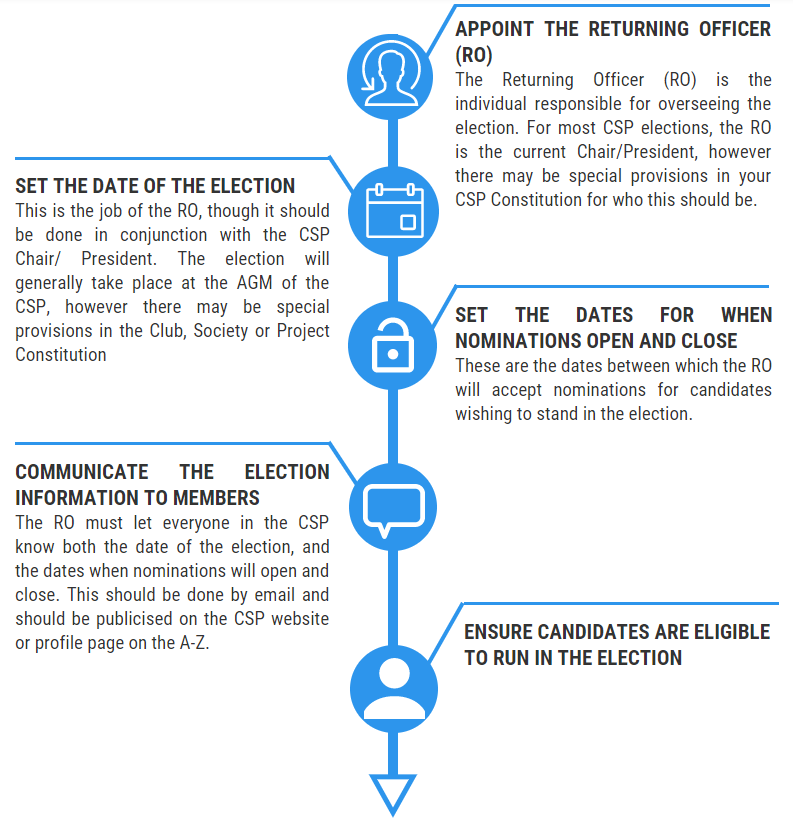 The Returning Officer (RO) is the individual responsible for overseeing the election. For most CSP elections, the RO is the current Chair/President, however there may be special provisions in your CSP Constitution for who this should be.

They must be a member of the Union and must be someone who is not standing for any of the positions in the election. They should be someone who is organised and fair. The full role and responsibilities of the RO can be found in the Minor Elections Bye-Laws.

Set the date of the election

This is the job of the RO, though it should be done in conjunction with the CSP Chair/ President. The election will generally take place at the AGM of the CSP, however there may be special provisions in the Club, Society or Project Constitution. You will also need to establish a venue for the election so bear this in mind when submitting your Room Booking requests.

Set dates for when nominations will open and close

These are the dates between which the RO will accept nominations for candidates wishing to stand in the election.

Nominations may be accepted by the RO on paper (by candidates signing a form to confirm their wish to stand) or by candidates emailing them. The RO should verify with all those standing as candidates the format in which nominations will be accepted.

Please note: every member of your CSP is eligible to stand as a candidate, therefore application processes are not permitted to determine candidates.

There may be special provisions in your CSP Constitution for who can nominate e.g. another member may put forward a candidate and this must be seconded.

Communicate the election information to members

Nominations are open to all CSP members eligible to stand in your election therefore it is crucial that the election details are communicated to all.

The RO must let everyone in the CSP know both the date of the election, and the dates when nominations will open and close. This should be done by email and should be publicised on the CSP website or profile page on the A-Z.

Make the contact details of the RO available and clear, e.g. batontwirling.president@imperial.ac.uk.

Ensure candidates are eligible to run in the election

In order for candidates to be eligible to both nominate and vote in a CSP election you must ensure they:

Typically all terms of office for CSP officers run from 01 August to 31 July.

If a candidate is on Interrupton of Studies (IoS) for their term in office, they will be unable to hold the position. For queries relating to CSP elections and IoS please contact the Student Activities team.

This is the date from which the RO will accept nominations from candidates wishing to stand for a position in the election. Seconders are not required by Union Constitution but may be by the constitution of the CSP.

After this date no further nominations may be accepted by the RO.

The RO must then circulate the details of the nominations received for each position to all the members of the CSP. The RO should invite each candidate to write a manifesto, which should also be circulated to all members. A further reminder about when and where the elections will be taking place should be sent to all members of the CSP prior to the AGM.