How to run an AGM: during

Previous    Next
It is important that what happens on election day is fair and democratic. All candidates must get a fair hearing and members must get the opportunity to ask appropriate questions. It is also important that voting is conducted via the most appropriate method including First Past the Post (FPTP), Single Transferrable Vote (STV) and Alternative Vote (AV).

For the day of the election you should:

A key part of an election is to hold a hustings.

A hustings is a meeting where election candidates or parties debate policies and answer questions from the audience. Hustings aim to provide voters with an opportunity to hear the views of candidates usually in the run up to an election.

Many CSPs decide to include this as part of their Annual General Meeting (AGM), however hustings can also be held before an AGM as a seperate event.

The Returning Officer (RO) should chair the hustings to provide an opportunity for each candidate to say why they should be elected, and for members of the CSP to ask them appropriate questions. 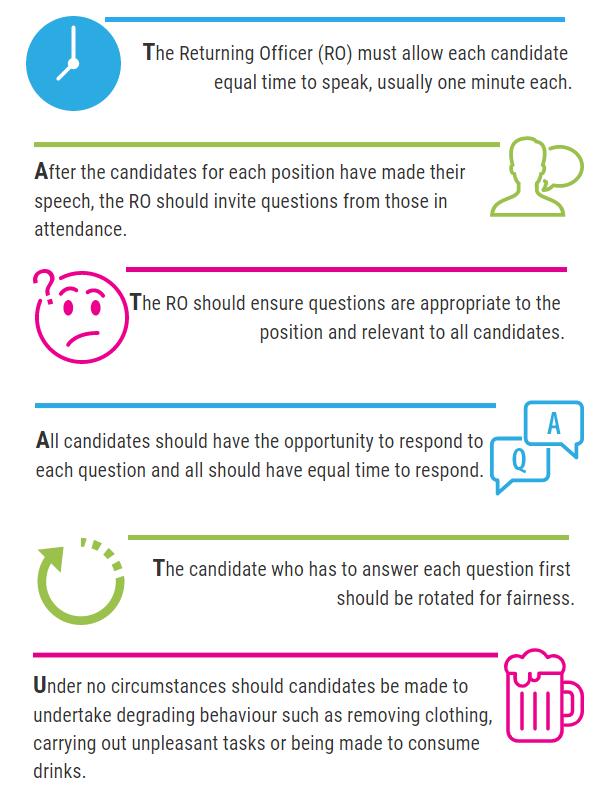 In the event that no nominations for a position are received by the close of nominations then the RO should open these positions to those present at the hustings or AGM. In this situation the RO should advise that this will happen prior to the beginning of hustings.

For each position being elected there should be an option for a new election. This is most often achieved by having a candidate called Re-Open Nominations (RON), this gives voters the opportunity to select a candidate where, if they win, the election will be re-run to seek better candidates.

Before voting takes place, it is important to ensure that those in attendance at the AGM are eligible to vote.

You can learn about how to determine whether a member is eligible to vote in your election in the How to run an AGM: before article.

What method of voting do I use?

Those casting votes may select their preferences for candidates in order, rather than just voting for one candidate. This is the system used for the Union Leadership Elections as well as for Members of the European Parliament. The basic principle of this system is that the least popular candidates are eliminated in rounds of counting, and their votes for their second choice candidates are added on, and so forth until one candidate has more than 50% of the votes.